In today’s age, people are very desperate to achieve perfection in their life, especially when it comes to their appearance. Mostly in the entertainment world, where the well-known models are very concerned about their physical advents, they find plastic surgeries their best option.

Korean model Hang Mioku, also made plastic surgery her obsession but got left with a wholly disfigured face in the overhaul.

Here is a list of facts about Hang Mioku’s age, her addictions to plastic surgery, her pictures before and after the surgery, and what she is up to as of today.

Mioku, who was born on July 8, 1963, underwent her first plastic surgery when she was 28 years of age. Being fascinated by it, she then underwent plastic surgery several times on her face, and slowly, she became obsessed with it.

Her only obsession was to obtain smoother skin and look more beautiful than others.

But considering the high risk that aftermath may consequence, it had to be stopped. And it was her doctors, who finally objected to her decision and refused to operate more plastic surgery on her, suggesting that if she got injected through silicone injects one more time, her face would become more subjugate.

However, Mioku was stubborn and was not ready to listen to the doctors, and thus, she started to try plastic surgery all by herself.

Initially, she began injecting the whole bottle of market silicone on her face. But since silicone was very expensive, she had to put a forceful hold on her desire. The Korea-native, who had become very obsessed with plastic surgery, couldn’t hold it for long, though.

After being unable to afford silicones, she was left with the only option – an option that disfigured her life completely – which was to inject cooking oil on her face. The insertions of cooking oil didn’t support the plastic surgery process she wished for but instead made her cheeks and forehead swollen and scarred.

See also  Nelly's daughter Chanelle to follow in his footsteps

The result of desperations for plastic surgery finally ended up with Mioku’s damaged face, as of which, she looked so disfigured, and even her parents couldn’t recognize her.

Mioku was then taken to the doctor, and it was confirmed that she had some psychological disorder which she couldn’t control herself.

The model, who was once a highly commended face in the Korean entertainment industry with her modeling and singing attributes, is finding it hard to jot in the present world, just due to her obsession to enhance her physical appearance through plastic surgery.

Before and After Plastic Surgery 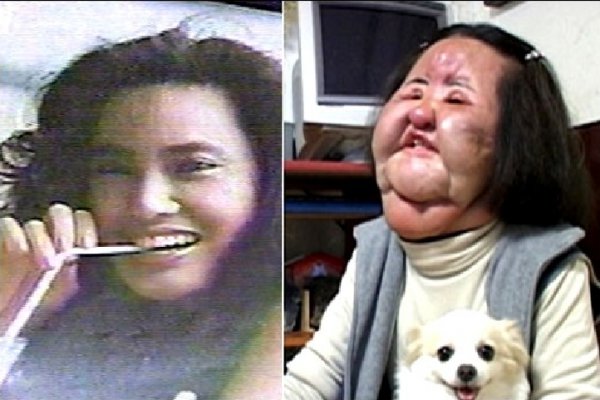 The Korean Model was undoubtedly the best in her prime, before the plastic surgery, with a bright and attractive glow in the face.

But now, looking at Mioku’s change of facial structures over the periods of her plastic surgeries, it inevitably reminds us that operations are not always beneficial.

Where is Hang Mioku now ?

When reports of her obsession went viral, she was supported financially to attempt reversal surgeries by her fan followings.

Her initial recovery surgery only managed to remove 60 grams of foreign substance from her face and 200 grams from her neck. Hopeful Hang then underwent numerous reversal surgeries to recover her original looks, despair that the damage had already been done.

After nearly a dozen reversal procedures, her face almost got recovered from swells, but much of her facial scarring became permanent and more prominent than before.

In 2013, Dailymail reported that she worked at a recycled clothes shop called The Beautiful Shop.

As of today, Mioku is still alive, but her life is as miserable as it can be, courtesy of her obsessions with procedures and surgeries.

The Secret Behind Tanya Burr's Weight Loss
What is Mackenzie Ziegler's Workout Routine ?
Is David Muir in a Relationship or Married? Is He Gay ?