Much like the other members of Payback, there isn’t much to the comic book version of Crimson Countess. No real name, no significant backstory, no accomplished goals, unceremonious death at the hands of Billy Butcher. She’s the sardonic comic’s take on Scarlet Witch, although she may be the least cutting of Payback’s jabs. The connection to her supposed inspiration is primarily depicted in her costume and her relationship with Mind-Droid, the comic’s answer to Vision.

Crimson Countess is essentially a pyrokinetic, capable of generating heat and fire with her mind. Her primary character traits are rage and promiscuity. Her relationship to Mind-Droid is heavily hinted to be an unhappy one, as Countess routinely cheats on her partner with high-ranking Vought executives. Her already brief appearance is cut short as she is easily dispatched by Butcher. She’s kind of a lazy one-note character as if the only aspect of Scarlet Witch worthy of parody was her relationship with Vision. Thankfully, it’s unlikely that the comic book version will be comparable to the one that’s coming to the screen. 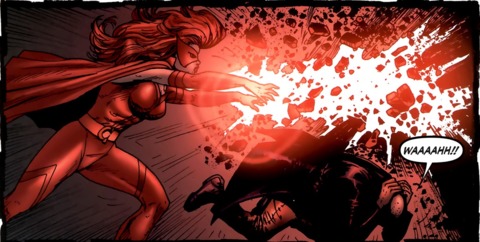 Crimson Countess’s big moment in the trailer for season three of The Boys depicts her obliterating an amusement park employee in a comical Homelander suit. She’s part of the apparent Civil War-style feud between superheroes. The Payback of the comics is marked by the fact that almost every character has inherited their name. Soldier Boy and Crimson Countess, among others, are the second or third version of their identity. The first versions date back to World War II, then each was killed in embarrassing ways. The show seems to posit that the characters are old enough to have served in the war themselves. Payback was once the most popular group of supes before being replaced by The Seven, leading to decades of obscurity for the older team. This would explain Crimson Countess’s hatred of Homelander and her possible role in the series.

Crimson Countess has been noted as a possible member of The Seven that lost out on the position to Starlight. The Countess’s other main appearance thus far comes in an in-universe commercial that shows off how she spends her time. This version of the character is a singer who is employed by Vought Land, an amusement park built around superheroes. Her attraction seems built around her singing about Vought’s version of superhero history. Crimson Countess comes across as a hero more powerful than Lamplighter, maybe even more powerful than Starlight, yet she’s sidelined as a tourist attraction. It seems as if the brand-focused monolith of Vought’s higher ranks pushed Payback aside to ensure the prominence of The Seven, and Payback could be seeking to reclaim their place.

Soldier Boy and Crimson Countess have taken up a fair amount of the promotion for the upcoming season. A brief shot in the trailer depicts Soldier Boy awakening from some form of containment. It’s possible he’s been effectively shelved for decades to make way for his replacement. While Soldier Boy’s been packed away someplace, Crimson Countess has been turned into a cheap Disneyland performer. It’s possible that the two of them reuniting, along with the other confirmed members of Payback, could be the new wrench thrown into the series’ format. With The Seven falling apart, some members quitting while others are killed, and Butcher’s newfound superpowers, a new team of supes could really shake things up. Of course, this could only be what showrunner Eric Kripke and the marketing team want viewers to think.

See also  Hugh Jackman's Workout Routine Is Quite Something

The Boys has built a ton of its big reveals around comical misdirection. Fans of the comics will likely know how little Payback actually played into the series’ story, but that reveal could be a big surprise for those who’ve only watched the show. The series may be propping up its answer to The Avengers as the next big thing as a deliberate misleading for the audience. The MCU is the biggest thing in superhero media, so it would be a fairly transgressive move to cut their representation short in the parody. Whether Crimson Countess and the rest of Payback are crucial parts of The Boys season 3 or a mean-spirited trick that will end in their meaningless deaths, fans are excited to see them. As long as she’s an improvement on the comics’ take on her, Laurie Holden’s Crimson Countess will be a fun new figure, for however long she sticks around.

How is Sarah Hyland Workout and Diet Routine ?
Is Zendaya A Vegetarian ? What Is Her Meal Plan And Workout Routine ?
How many languages can Benedict Cumberbatch speak ?