Noah Cyrus was born into an A-list family, with Tish Cyrus, a famous actress, and Billy Ray, a singer-songwriter. Her fans and following have witnessed her meteoric climb to fame over the years, with blockbuster albums like People Don’t Change and NC-17 solidifying her place in the music industry.

However, admirers have noted alterations in her face structures, particularly her lips, cheeks, and brows, leading to speculation about her plastic surgery. The 21-year-old has been silent on the subject. Some plastic surgery experts, on the other hand, believe her significant facial changes aren’t totally natural.

After photographs of Cyrus with plump lips and high-raised brows surfaced on Instagram, speculations about her plastic surgery began to swirl. Her admirers couldn’t stop themselves from wondering if she’d had surgery. On October 1, 2020, Cyrus received scathing comments about her lips in one of her close-up photographs uploaded on Instagram.

The lip injection, according to one follower, revealed a lack of self-esteem. Someone warned her that her fillers in her 30s would make her seem like a terrible nightmare. Others supported her by praising her beauty on Instagram. One even said that having operations was her decision and that those making nasty remarks were people who couldn’t afford it.

Noah Cyrus may have utilized fillers

The vocalist of “All Three” has stayed mum about reports of plastic surgery. However, some cosmetic surgeons expressed their opinions on her metamorphosis, hinting that she took fillers. In June 2017, Dr. Vartan Mardirossian, a double board-certified plastic surgeon, spoke with InTouchWeekly about Cyrus’ increased facial volume.

See also  Does Lily Collins have a special workout routine ? Or is it the diet ?

After looking at her photos, the doctor hypothesized that she might have taken Botox to raise her brows. He also said that she may have kept her plump appearance with fat grafting and facial implants. Another facial plastic surgeon, Dr. Andrew Miller, agreed with him, hinting that she may have had fillers or implants in her cheeks and chin.

Similar comments were made to Mirror in 2019 by a spokeswoman for MYA Cosmetic Surgery. Cyrus had non-surgical lip and cheek treatments, including dermal fillers to reconstruct the cheekbone, according to the spokesman. 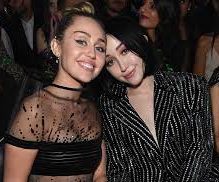 Miley Cyrus’ younger sister has had a difficult romantic history, to say the least. In 2017, she had her first publicized romance with Tanner Drayton, a fellow musician. Cyrus moved on and began dating someone else after the couple dated for almost a year.

In 2018, the Nashville native had an on-and-off relationship with rapper Lil Xan. The couple divorced in September 2018 after adultery claims surfaced, and they briefly reunited in April 2020. Meanwhile, the ‘Make Me’ singer was dating DJ Diablo’s Sebastian Baldeon.

From 2019 until 2020, she had a famous but baffling relationship with Tana Mongeau, which fanned claims that she was transsexual. On time, they addressed and regarded each other as girlfriends, but they refused to date. Cyrus was romantically associated with Machine Gun Kelly in January 2020, and she was romantically linked with Smokepurpp in July 2020.

What is Mackenzie Ziegler's Workout Routine ?
Brian Kleinschmidt Is Proud To Be His Daughter's Bonus Dad
Here’s What Kat Stickler’s Ex Husband Mike Is up to after Their Split