6 Underground is an action thriller movie directed by Michael Bay. It tells an story of 6 individuals who are choosen for a misson but not just for their skillset but also for their desires to change the future.

Bay is undeniably very good at big ridiculous action and CGI scenes and he doesn’t disappoint here. This is a laugh out loud action movie with witty one liners and mind blowing action scenes.

If you liked this  movie and action/ thriller genre is something that you enjoy that here are movies like 6 Underground that you should watch:

Keanu Reeves has done some wonderful action movies in the 90’s but he has never done something like John Wick. This movie  has set new standards for action movies, not only the action sequences are attractive to watch but they are innovative as well. If cinematic universe was meant for the sake of entertainment, John Wick series is a beautiful epitome of entertainment.

It is also a source of edification for the actors as to how well they must prepare themselves for their roles. Keanu Reeves proved it that hard work and only hard work can take you to the pinnacle.

Not only is it a thriller and a bloody violent film that will keep you on your toes it shows you other concepts and the philosophy behind an ambitious and a power driven man who seeks vengeance over passion and love. So even though it’s a thriller with many violent scenes the idea behind it drives a better conclusion to the movie making it worth your while.

Another movie like the 6 Underground is The A Team, a remake of the popular action fiction series of the same name. An action packed movie with interesting several plot twists  and enjoyable charaters, The A Team tells the unorthodox but very successful unit of the U.S. Army.

Liam Neeson (Hannibal Smith) his character is the leader, how can you not like him when you see what plan he comes up with. Bradley Cooper (Face) is pretty boy in who is constantly involved with the women. Quinton Jackson (B.A.) is the smart and tough guy but he is afraid of small things. Finally, Sharlto Copley (Howling Murdock) is the crazy, fun guy who is weired but amazing both at the same time.

James McAvoy and Angelina Jolie starrer “Wanted” is a rollercoaster ride with twists and turns. It all begins when an assasin from an organization goes rogue and is in hunt for Wesley ( James McAvoy ).  Wesley learns that the same person has also killled his father who used to be a member of the assasin organization.

It’s packed with slow motion, perfectly shot, cinematographic action. There’s bullets extruding from peoples heads in full graphic glory. Cars flip over in slow motion, while characters mouth wise comments. The visual and audio effects really transport you into scenes.If you are an action lover than this is right up your alley.

Originally released in 1995, this epic Action packed and comically perfect movie is the foundation movie of the Bad Boys trilogy. Epic duo of two Miami Cops Mike (Will Smith) and Marcus (Martin Lawrence) makes every bit of the movie’s duration enjoyable with a solid storyline.

Bad Boys is all about the daily life adventurous encounters of two of the coolest cops of Miami Police department Mike & Marcus who eventually are bestest friends and they solve their crime cases with pumping action sequences, adrenaline rush packed car chases and super comic punchlines.

Authentically funny and intense as well as slick and suave throughout, this roller coaster ride with guns is more accessible to a broader audience, in my opinion, and packed with action sequences that ride the appropriate line between “awesome” and “so-implausible-it’s-ridiculous.”

Kingsman additionally revitalizes the spy genre with social satire, innovative gadgets, a host of likable characters (including the villain), and one of the most unique and germane villain motivations I’ve seen in recent cinema. Like it’s kind of unnerving how much Samuel L. Jackson’s character makes sense – you know, in a roundabout, crazy way, similar to Javier Bardem’s Silva in Skyfall.

Whether or not you agree with Valentine’s observations and plan, the fact is you will understand exactly where he’s coming from and why, and that kind of scary clarity makes the film all the more exciting for those of us who prefer a little story with our fighting, flirting, and funnies. 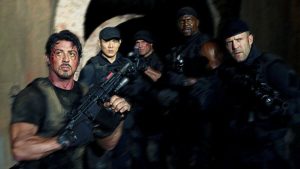 Sylvester Stallone leads an All Star action cast including Arnold Schwarzenegger, Jason Statham, Dolph Lundgren, Bruce Willis and others in a testosterone fuelled action romp. This is truly the perfect popcorn action movie from a Franchise that just gets better and better. Forget the throwaway plot or looking for a deeper meaning in the movie and just grab a bag of your favourite snacks and put your feet up. This is simply just an action movie for action fan’s.

See also  7 Movies Like Gone Girl That You Must Watch

It’s a old school, back to classic, alpha male action movie. You got to love it for its predictability. It gives just the right level of machismo and feel good moment that brings back childhood memories.

The Fast and the Furious

The Fast and the Furious is an enjoyable and joyful ride about those who are involved in stealing and racing, eyed and chased by cops. It is a nice and simple film with limited action sequences and thus able to give shape on characterization. The casting choices and the racing sequences are to be praised particularly the performances by Paul Walker and Vin Diesel, and thier likeable chemistry.