Kez Sunday Udoka was born under the zodiac sign of Scorpio on 7 November 2011, in Los Angeles, California USA; he holds American nationality and his ethnicity is of mixed Nigerian, Trinidadian, Barbadian, Grenadian and American descent. He is only known as the son of the famous actress Nia Long, and the professional basketball coach Ime Udoka.

Kez is a student in a local middle school, currently 10 years old; he has short, brown curly hair and dark brown eyes. According to pictures from his mother’s Instagram, he is growing healthily, although there’s no information about his weight and height.

He is a big fan of the Boston Celtics basketball team, whose head coach is his father.

Kez has an older half-brother Massai Zhivago Dorsey II, his mother’s son from her relationship with an actor Massai Z Dorsey.

Who is his mother Nia Long? Nia Long was born under the zodiac sign of Scorpio on 30 October 1970, in Brooklyn, New York City USA; she holds American nationality, and her ethnicity is of mixed Barbadian, Grenadian and Trinidadian descent. She is an actress with nearly 70 credits to her name, perhaps still known best for her role as Lisa Wilkes in the popular ‘90s sitcom “The Fresh Prince of Bel-Air”, starring Will Smith, Alfonso Ribeiro and James Avery.

Nia was raised in Brooklyn by her parents Talita and Doughtry, her mother was a teacher and printmaker, and her father was a poet and high school teacher. She has an older half-sister, known as Sommore, through her father’s side. When Nia was very young, her parents divorced, and she lived with her mother, although they were moving often; Talita eventually chose to stay in Los Angeles, California.

See also  All You Need To Know About Bryce McQuaid

Nia had an interest in acting from an early age, and also studied ballet, jazz, and tap dance, learned how to play the guitar, and was also a gymnast.

Nia attended Westchester High School, then upon matriculating in 1989, she didn’t enroll at college but pursued her acting career.

She made her acting debut in 1986, in an episode of the series “227”, although her role was uncredited. In the following years, Nia gained recognition as a talented, young actress. She made an appearance in a couple of movies in minor roles, before in 1991 being cast to play Kathryn Speakes in the series “Guiding Light”, which had 450 award nominations and won 106.

After this role she was cast as Lisa Wilkes in “The Fresh Prince of Bel-Air”, which brought her nomination for Image Award Outstanding Supporting Actress in a Comedy Series, followed by her support roles in several movies, before she was cast to play Jordan Armstrong in the 1999 movie “The Best Man”, starring alongside Taye Diggs and Morris Chestnut.

Another significant role for Nia was her portrayal of Sherry Pierce in “Big Momma’s House”, starring alongside Martin Lawrence and Paul Giamatti in this action crime comedy, which brought her nominations for Blockbuster Entertainment Award Favorite Actress – Comedy, and for Image Award (NAACP) Outstanding Actress in a Motion Picture.

In the following years, Nia was cast to play Sasha Monroe in the Primetime Emmy-awarded series “Third Watch”, and Nia won two Image Awards (NAACP) Outstanding Actress in a Drama Series, in 2004 and ’05.

She then reprised her role as Sherry in the sequel “Big Momma’s House 2”, followed by appearances in the movies “Premonition”, “Are We Done Yet?”, “Gospel Hill”, and “Mooz-Lum”, before she reprised another role as Jordan in the sequel “The Best Man Holiday”, for which she won Acapulco Black Film Festival Hollywood Award Best Actress.

See also  Is Tom Pelphery Married ? What is His Net Worth ?

Nia next starred alongside Amy Smart and Wendi McLendon-Covey in the comedy-drama “The Single Moms Clubs”, followed by roles in the series “The Divide”, “Uncle Buck”, and “Empire”, among others. She portrayed Assistant Director Shay Mosley in “NCIS: Los Angeles”, followed by her roles in the movies “Fatal Affair”, “47 Meters Down Uncaged”, “The Banker”, and “Life in a Year”.

Speaking about Nia’s love life, there were various rumors, but it is widely known about her engagement with her then-boyfriend Massai Z. Dorsey, whom she met on the set of the series “Third Watch”; their wedding was announced for June 2001, after Nia gave birth to their son Massai Zhivago Dorsey on 26 November 2000, however, they broke off the engagement.

In 2010, Nia met Ime Udoka, and gave birth to their son Kez Sunday in 2011 – they became engaged in 2015, with people asked why won’t they marry, and Nia stated to Essence that marriage isn’t a priority for her.

As of December 2021, her net worth has been estimated at $5 million.

Who is his father Ime Udoka? 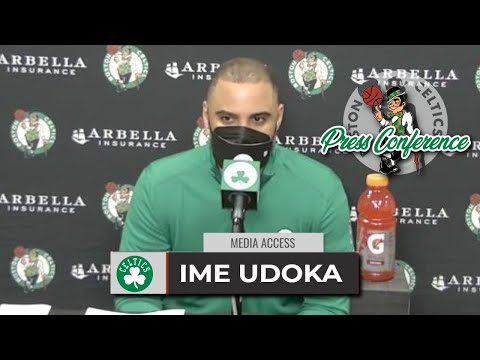 Ime Sunday Udoka was born under the zodiac sign of Leo on 9 August 1977, in Portland, Oregon USA; he holds American nationality and his ethnicity is Nigerian. He’s a former player and nowadays professional basketball coach, the head coach of the Boston Celtics of the National Basketball Association (NBA).

His father Akwa Ibom was born in Nigeria, so Ime was qualified for Nigerian citizenship, and played for the Nigerian national team; his late mother was an American born in Illinois.

Ime attended Jefferson High School, and upon matriculating in 1995, enrolled at Utah State University Eastern, then he transferred to the University of San Francisco, but eventually graduated from Portland State University in 2000.

He started his basketball career playing in the National Basketball Development League (NBDL), until in 2006 he was signed by the New York Knicks, later he played for the San Antonio Spurs, Sacramento Kings, New Jersey Nets, and UCAM Murcia of the Spanish Liga Endesa.

His coaching career started in 2012, when he joined Gregg Popovich, an American professional basketball coach, as an assistant coach at the San Antonio Spurs, where he stayed until 2019.

In June 2019, Ime was hired as an assistant coach of the Philadelphia 76ers, and in the following year, he worked for the Brooklyn Nets, until 28 June 2021, when he became the first-ever head coach of African origin in NBA history.

Meet Francesca Sofia Novello, Valentino Rossi's Girlfriend
Who is Francesca Farago ? Does She Have A Boyfriend ?
Who is Casey Frey ? Know Everything About Him