Professional chef Amanda Freitag is famous as a stern judge of The Food Network’s Chopped (2010-present). Her fame has brought attention not only to her career endeavors but also in her personal life. But, New Jersey native looks to be in love with cooking in such an intensity that it has refrained her from being in actual love with a human!

Here is what you need to know about her age, family, parents, and stance on getting married and raising a family with a husband. 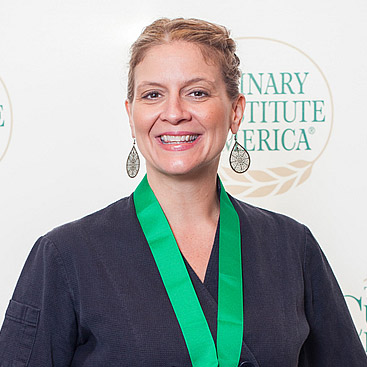 The New York-based chef was born on May 11, 1972, in Cedar Grove, New Jersey. Her parents are father Paul and mother, Kathleen. She also has two brothers named Jason Freitag and Justin Freitag.

She had a close bonding with her grandmother, Margaret Grazioli, as suggested by her Instagram post on the occasion of women’s day. Her grandmother intrigued her as a stylish working woman in the early days.

Amanda and her brothers were left to eat prepped meals and sometimes even frozen, being born to busy parents. She had no option but to cook independently, and that’s how her interest in cooking was shaped.

Cooking Career And Net Worth

Everyone noticed her growing passion for food, including her home economics teacher, who suggested attending Culinary School of America in NY, which she did.

The aspiring chef was not in abstinence of opportunities after she graduated from the CIA in 1989. She worked in some famous restaurant chains like Vong, Cesca Enoteca & Trattoria(2003), and many more.

She then grabbed extensive experience in cooking by traveling to France and Italy in 1999.

With comprehensive knowledge in the culinary, Freitag debuted her television career in 2009 with her appearance on The Martha Stewart Show, followed by The Next Iron Chef America in its second season. Finally, her big hit, the judge at Chopped in 2010. She has been a regular judge in the Chopped.

She has also been hosting the American Diner Revival with Ty Pennington since 2015. In the same years, she had published her cookbook, The Chef Next Door: A Pro Chef’s Recipes for Fun, Fearless Home Cooking, in September 2015.

With a flourishing career, the food lover celebrates an accomplished career as a chef and has a lavishing net worth of around $3 million.

Some people get too consumed with their illuminating professional life that they forget to add elements to their personal life. And, the Chopped judge seems to be one such person.

There is no evidence that the 48-years-old is married or is in a relationship.

The only whim about her relationship status is, she once had an ultrasound technician of a boyfriend named Raphael for four years. The TV chef was also suspected of dating a hunky man named Gregory Alan on account of her selfie posts with him in June 2016 and 2018 of the same month.

But hold on for the truth before delving into the suspected dating details. Turns out, the pro’s ‘selfie partner’ married his wife named, Elena Ruiz, in June 2018.

The truth that the charming celebrity chef is single is not concealed at all. But does her singlehood make her a lesbian?

Amanda has never been rumored to make out with a female as of now. She had had a whole time keeping up with men in her culinary career. So, she might be busy maintaining her position in the business. The woman is busy, so how about letting her be?

Nevertheless, her kins do want her to be a gay icon. In an April 2020 tweet, her friend Kedzie Teller stated that he wanted her to reverberate with gay individuals. In reply to the tweet, a fan exclaimed that she already was a gay icon. The fans also added that the people from the gay community loved her at Food Network.

Who is Sidney Poitier's first wife ? Where is She Today ?
Shemar Moore's Thoughts on Getting Married
Is Chloe Bailey Dating Barcelona Star Memphis Depay?