Jaina Lee Ortiz, famously known as Andy Herrera from ABC drama series Station 19, is a single woman, as she has separated from her ex-husband Bradley Marques.

The American actress and dancer had met Marques, a screenwriter, for the first time in 2009, and subsequently, they started dating each other. It had only been two months of their dating when they got married in January 2010.

In the initial years of her married life with Marques, she was enjoying her life with him. Evidently, she posted pictures and videos with him on her social media, where she seemed to relish her life with her spouse. 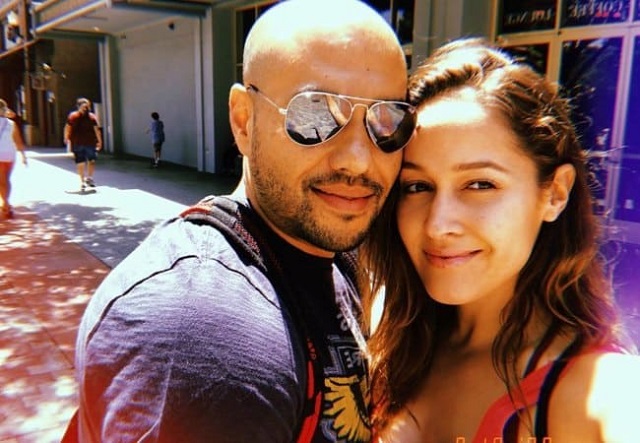 In one of those instances, Ortiz posted a video featuring her ex-husband and dog Zorro, where she was practicing her tongue twisters.

“I’m practicing my tongue twisters and Brad and Zorro think I’m crazy. It’s fun! Who wants to join me,” she captioned.

Likewise, she had posted a group picture of herself, her friends, and Marques on November 24, 2017, marking the occasion of Thanksgiving.

Scrolling through her Instagram, we found out that the mentioned picture was the last picture the actress had posted that featured her ex-husband Marques.

All that being said, both Ortiz and Marques have kept their divorce matter private to themselves.

On the other hand, after the separation, Marques seems to have found someone special in his life already. He usually posts pictures with her on his Instagram and expresses his love for her openly.

The new woman in his life is actress and comedian Courtney Scheuerman.

On March 3, 2021, he posted a special picture with her, as he was close to kissing her. “The days seem to speed by in a blur – but we just getting started. Love her,” Marques wrote.

Likewise, Scheuerman revealed that they completed one year of dating in February 2021 when she shared a romantic picture with him on February 28, 2021.

As for Ortiz, she does not seem to be involved with any man after her separation from her ex-husband. And by the looks of her social media posts, she seems to be more focused on her career than her dating life.

Actress Ortiz celebrates her birthday on the 20th of November every year. She was born in 1986 in Fort Ord, California, USA.

But she was raised in The Bronx, New York as the only child of Puerto Rican parents, Daisey Sara Acevedo and Joe Ortiz. Her father, Joe, is a retired NYPD 1st grade Detective.

The Rosewood star was nine years of age when she began taking salsa classes and was teaching the craft at the age of 15.

Her acting career started by studying the Meisner technique at Maggie Flanigan Studios. After completing two years of study, she made her theatrical debut in an off-Broadway play.

Ortiz, who weighs 53 kg, went to the City University of New York and Herbert H. Lehman College, New York, for her college degree.

Shemar Moore's Thoughts on Getting Married
Is Lana Del Rey Married ? Who is She Dating ?
Is Hailey Jackson Pregnant ? Who Is Her New Partner After Divorce ?