T.J. Holmes is an ABC news anchor and television broadcaster who is best known for shows like World News Now and Good Morning America.

After working as a substitute news anchor for ABC News, he became a permanent news anchor in 2014.

According to ABC Audio, Holmes has spoken about a number of topics, including the impact of Covid on professional sports, the death of Chadwick Boseman, and the police shooting of Daniel Prude.

Holmes worked for Cable News Network for five years before joining ABC, and subsequently for Black Entertainment Television, or BET.
He departed the African-American audience-based network in 2013 after his show Don’t Sleep was canceled.

T.J. has been married twice. His first wife was Amy Ferson but the marriage didn’t work out so the couple separated in 2007. With Ferson, he has two children Brianna and Jaiden.

Then he married Marilee Fiebig, on March 1, 2010. The couple’s eight-year-old daughter, Sabine, was born three years after they married.

The CNN alum is known for being a loving spouse and father.

During his marriage anniversaries with Fiebig, Holmes writes messages of love and affection for her and posts them on his social media site.

Holmes was spotted doing the hair of his gorgeous daughter on Good Morning America in 2020. During the presentation, Holmes professed his love for his daughter Sabine and admitted to combing her hair on a regular basis, particularly on Fridays, for years.

See also  Who Is Samantha Harris Married To?

Who is Marilee Fiebig ? 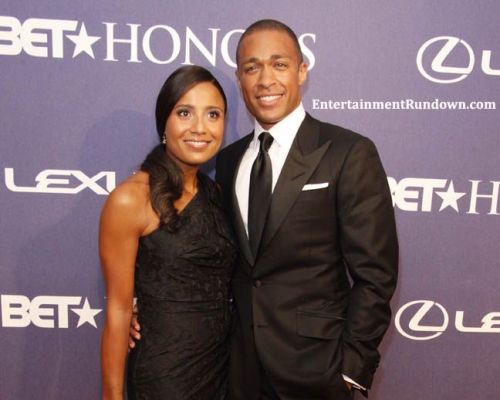 Holmes’s wife, Fiebig, is an experienced lawyer. She formerly worked as an immigration attorney for a corporation.

Fiebig is currently a Senior Director for Save the Children in the United States, where she works on issues of diversity and inclusion.

She has worked in the fashion and entertainment industries as a business executive.